Debate Debacle: What Biden and Trump SHOULD Have Been Asked 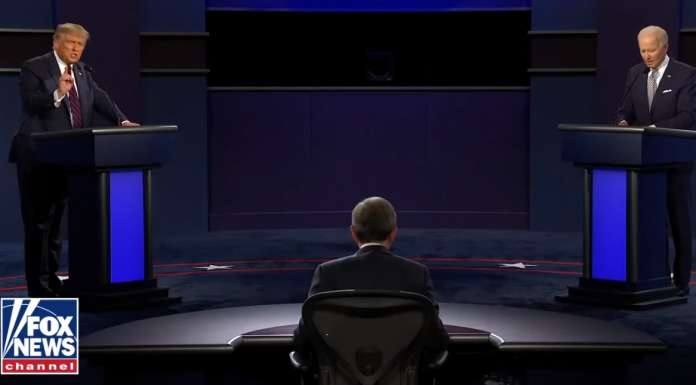 (Stefan Gleason, Money Metals News Service) Tuesday night’s presidential debate between Donald Trump and Joe Biden won’t go down as a great moment in the annals of American democracy. That much both camps, as well as independent observers of the chaotic spectacle, can agree upon.

The post-debate debate over whose interruptions or insults were most egregious totally overlooked the glaring failure of moderator Chris Wallace to ask any substantive questions about the country’s unprecedented financial predicament.

None of these topics that bear down starkly on America’s financial future were even brought up!

Whoever occupies the Oval Office for the next four years will have to make critical decisions that could determine whether the country suffers a currency crisis or other great reckoning.

Chris Wallace chose instead to badger the President of the United States about how much personal income tax he recently paid, raise a fuss about his rollback of “racial sensitivity training,” and scold like a schoolmarm whenever Trump initiated spontaneous exchanges with his opponent.

The establishmentarian journalist’s sympathies toward Biden were on full display.

Beyond that, his obliviousness to the elephant in the room – the growing fiscal and monetary crisis both candidates have had a hand in creating – did voters a major disservice.

Here’s the question the debate moderator should have asked:

What’s the end game for skyrocketing federal budget deficits and a national debt that now represents well over 100% of GDP – especially given that entitlement outlays and other “mandatory” spending programs are projected to surge in the years ahead?

Back in the 1990s, it was still common to ask presidential candidates what they would do to balance the budget and reduce the national debt. Debt became one of the major issues of the day after it was brought to prominence by the charts and graphs of independent candidate Ross Perot.

As of 2020, the federal government is set to run up a previously unthinkable deficit of over $3 trillion to push the national debt to $27 trillion. And nobody seems to care.

Obviously, no politician who hopes to win election will oppose emergency coronavirus stimulus measures in the name of fiscal responsibility. But the American people deserve to be told the truth by elected officials about how exactly they intend to pay for all the “free” money they are handing out.

Had the candidates been pressed on this issue, Biden might have spouted something about increasing federal revenues by making the rich pay even more in taxes. Trump might have talked about growing the economy and hitting China with tariffs.

But a sharp debate moderator who grasped the nature of what the Federal Reserve is now doing – and who understood the link between debt growth and the country’s stray from sound money principles – would cut to the chase.

Of course it is. In effect, there is now a bipartisan consensus is support of the debt monetization.

The once obscure central banking mandate euphemistically called Modern Monetary Theory (MMT) has now quietly become mainstream. It essentially tasks the Fed with printing whatever dollars the government needs, rendering debt burdens irrelevant while marking down the value of the currency.

Do you support MMT, Mr. President? What about you former Vice President Biden?

They would each be hard pressed to deny it at this point.

In the wake of the COVID lockdowns, the Treasury Department and the U.S. Congress essentially told the Fed to do whatever it takes to avert debt defaults, even if means buying literal junk bonds and adding them to its balance sheet. That’s exactly what the central bank did.

The Fed’s so-called “dual mandate” of stable prices and full employment is now an in infinite mandate. Central bankers have assumed the role of funding the government, bailing out financial markets, stimulating the economy, propping up asset prices, and lifting consumer prices.

Ever since President Richard Nixon de-linked the U.S. dollar from gold in 1971, government spending and debt has accelerated to the upside.

It’s all reflected in gold prices, which recently surged to a record high of over $2,000/oz – 100 times higher compared to gold’s dollar price a century ago. Measured by gold, that’s a 99% decline in the currency’s purchasing power!

Whether Fed Chairman Jerome Powell wants to admit it or not, the ultimate arbiter of his actions won’t be the next President who decides whether to reappoint him, the members of Congress to whom he gives testimony, or the voters who elect them in November.

The ultimate arbiter of monetary policy will be the precious metals markets.

A loss of confidence in the currency will be reflected in a further rise in gold and silver prices. Neither Trump nor Biden will be able to override the veto of sound money.