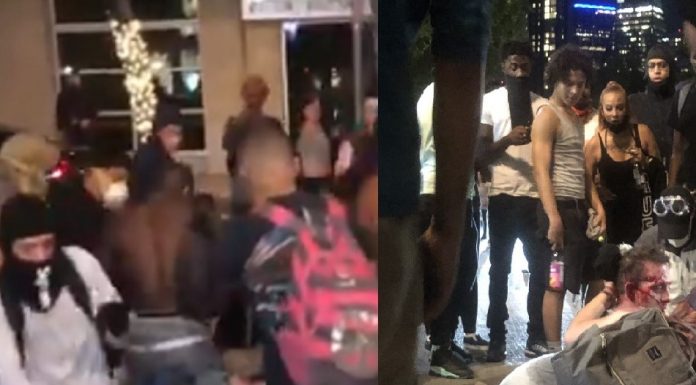 (District Herald) A Dallas shop owner has been stoned by a mob of rioters for attempting to defend his small business with a sword.

Schaffer said that “some people were concerned, others laughed at him — and many more continued to loot high end stores around him while he bled out [from] the assault.”

WARNING: THIS FOOTAGE IS HORRIFYING AND GRAPHIC:

Looters ran at him, then he charged rioters

I called an Ambulance and it’s on the way pic.twitter.com/kFxl3kjsBC

The rioters have destroyed and looted countless businesses, committed arson, kidnapping, and even murder.

NBC 5 reports: “Dallas police estimated 150 protesters looted a cigar shop and a donut shop at the intersection of Elm and Lamar streets, while NBC 5’s media partner The Dallas Morning captured video of others looting a Subway on Field Street.”

Many mayors and governors have had police standing down and letting the chaos continue. They are leaving shop owners forced to attempt to defend their livelihoods from people with no value for human life.