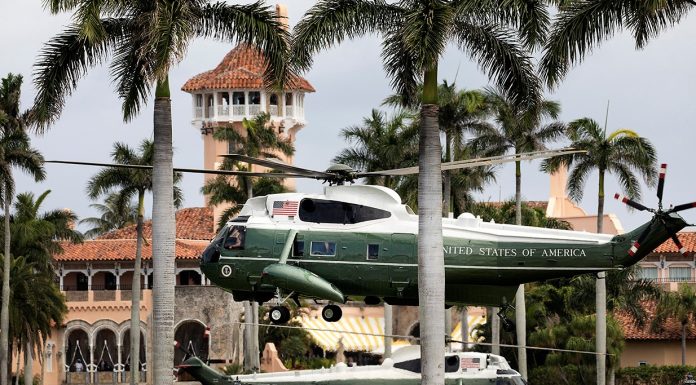 (Associated Press) A Chinese businesswoman convicted of trespassing at President Donald Trump’s Mar-a-Lago resort and lying to federal agents will learn Monday if she will have to spend additional time behind bars.

Prosecutors want U.S. District Judge Roy Altman to sentence Yujing Zhang to 18 months in prison for trespassing at the Palm Beach club in March and lying to the Secret Service agents who confronted her, saying she lied about her finances, hiding about $50,000.

The 33-year-old Shanghai consultant acted as her own attorney during her September trial and has not filed any documents regarding sentencing — or anything else. She has no prior criminal record, so that could weigh in her favor. She could receive up to six years. Federal guidelines recommend a sentence of zero to six months.

When Zhang was arrested, she was carrying four cellphones, a computer and an external hard drive and her hotel contained more electronics and cash. That led to speculation she might be a spy, but she was never charged with espionage.

Instead, text messages outlined at her trial and posted to her court file after her conviction suggest she is obsessed with wealth and had hoped to meet the president or his family to discuss possible business deals, along with other U.S. executives.

She also seemed to have an inflated sense of her importance, thinking she could get meetings with top officials despite having no international profile.

Zhang’s troubles began in February when she paid $20,000 to “Charles,” a man she knew only online, to attend a Chinese-American friendship event at Mar-a-Lago on March 30 as part of a seven-day excursion that included trips to Washington, D.C., and New York City.

The Mar-a-Lago event promised a photo with the president or a member of his family. Such meet-and-greets are common at Mar-a-Lago, the exclusive club Trump has run since 1995 on the grounds of a 1920s mansion built by cereal heiress Marjorie Merriweather Post.

Zhang’s former public defenders believe “Charles” is Charles Lee, a Chinese national who ran the United Nations Chinese Friendship Association. It is not affiliated with the U.N. He was photographed at least twice with Cindy Yang, a Republican donor and former Florida massage parlor owner who organized Mar-a-Lago events.

In March text messages that the FBI translated from Mandarin, Zhang told Charles she wasn’t interested in visiting Walt Disney World, the U.S. Capitol or other sightseeing – except the White House and the New York Stock Exchange.

Instead, she wanted to meet officials from Morgan Stanley, Citi Bank, Tesla and the U.S. Commerce Department. “I will try my best,” he replied. She later asked him to arrange meetings with members of Congress.

After three days, Charles texted that the Mar-a-Lago event had been canceled but he could get her into other events featuring Bill and Hillary Clinton or billionaire Warren Buffett. He suggested the Clintons have connections she could meet.

“The presidents are all supported by the wealthy capitalists,” Charles wrote. “These people always come forward for these events. Those are really the Wall Street big wigs.” Imagine the photo and how it would improve her business, he added.

“A pretty girl like you standing in the middle and on one side is the state secretary and on the other is the president. That is a great deal and think about the impact,” Charles wrote.

Instead, Zhang demanded a refund. Prosecutors said this proved she knew the Trump meet-and-greet was off and her arrival at Mar-a-Lago wasn’t a misunderstanding.

Zhang flew to the United States on March 28. Two days later, a taxi dropped her off at the Secret Service screening area across from Mar-a-Lago. The president and his family were visiting the club, although he was playing golf at his nearby course and Zhang was never near him.

Agent Krystle Kerr testified that Zhang said she was there to visit the pool. Mar-a-Lago managers thought she might be the daughter of a member named Zhang and admitted her. Zhang told a receptionist she was there for the U.N. event, but the woman knew no such event was scheduled and alerted the Secret Service.

Agent Sam Ivanovich testified Zhang told him she was there for a Chinese-American event and showed him an invitation in Mandarin, which he doesn’t speak. He said a search found Zhang’s computer and other electronics.

She told agents she feared they would be stolen if she left them in her hotel room. However, when agents searched her room they discovered in the open more electronic gear — including a device to detect hidden cameras — $8,000 in cash and numerous credit and debit cards.

Ivanovich said Zhang lied again, saying she never told Kerr she was there to visit the pool. She carried no swimsuit.

She was then arrested and has been jailed since.