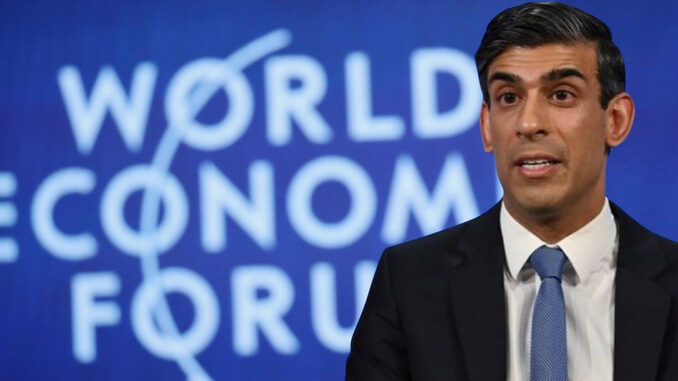 (NewsPunch) Billionaire Rishi Sunak, Britain’s newly installed Prime Minister, has family ties to a technology partner of the World Economic Forum that has advocated for a New World Order agenda complete with a “social credit score” and a ban on cash.

Sunak’s wife, Akshata Murty, is the daughter of the Indian billionaire NR Narayana Murthy, often described as the Bill Gates of India, who founded the software company Infosys. According to reports, his daughter has a 0.91 percent stake in the company, worth about £700m.

Infosys is listed as an official partner of the World Economic Forum (WEF), who are reportedly developing the technology to implement its Chinese style “social credit score” system in WEF-aligned countries.

Social credit scores are already being used in China and are used to control every aspect of an individual’s life. The WEF are championing the system, claiming it is needed to control such things as ‘climate change’ and are directly pressuring “infiltrated” governments to implement it.

For a social credit score to work, punishment for doing the wrong thing must be the ultimate incentive, and there is no better ‘incentive’ than to take away someone’s money.

The new British Prime Minister’s links to the WEF do not end with his family’s business.

Several Infosys executives have also contributed articles to the WEF website, including the company’s Global Head, President, and Chief Compliance Officer. Infosys President Mohit Joshi has penned articles for the site in favour of digital banking, which provides the technological framework for the “social credit score” system the WEF has come under scrutiny for attempting to effectuate across the world.