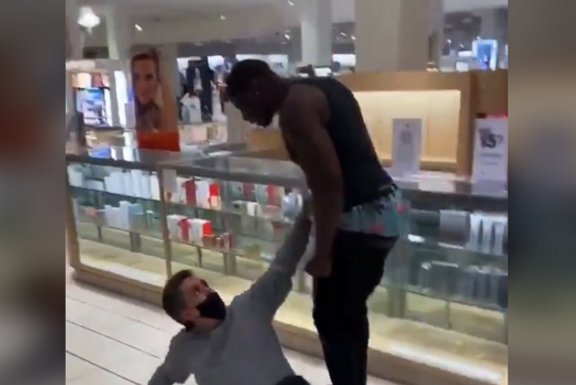 (RT) A viral video shows a black man assaulting a Macy’s employee in Michigan, wrestling the white man on the ground and beating him allegedly over a racial slur.

The department store says the attack was unprovoked.

Footage of the incident surfaced online earlier this week, promptly going viral. According to the description of the video, the black man overheard the Macy’s employee using the word “n****r” while on the phone and then attacked him right at the store.

The video itself does not show what led to the assault – it begins with the black man punching the victim from behind. Moreover, it shows the attacker himself repeatedly using the n-word as he was beating down the white employee, who seems to be wondering why the man assaulted him.

“What did you do that for?” the man can be heard saying.

On Friday, Macy’s said it reviewed the incident, checked all the footage available and found it was actually unprovoked.

“Violence in the workplace of any kind is unacceptable. All the materials from the evening have been reviewed and it is clear that the attack was unprovoked,” the chain said in a statement.