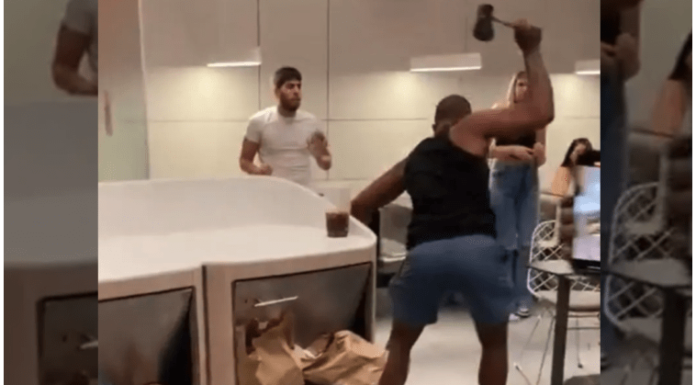 (Daily Mail) The axe-wielding man who was filmed menacing customers in a New York McDonald’s over the weekend was rejected by a young woman moments leading before the incident, a witness has revealed – sending the jilted suspect into a rage.

The incident at the Lower East Side eatery on Delancey Street in Manhattan  transpired early Friday at roughly 2:25 am, police said – and saw 31-year-old Bronx man Michael Palacios arrested for brandishing the weapon.

A delivery man who witnessed the fight has since revealed that the altercation began after Palacios, who reportedly had been drinking, was spurned by the unidentified woman after asking for her number in the store moments before.

Palacios, who was out on the street hours after his arrest, is facing charges of criminal mischief, menacing, and criminal possession of a weapon in relation to the incident.

On Saturday, Palacios appeared to be bragging about the encounter on his Instagram, posting a photo of him confidently looking down the customers he was seen threatening moments before whipping out the weapon.

The incident is the latest in a number of violent episodes at New York City’s McDonald’s.

In July, a McDonald’s worker was pepper sprayed in what appeared to be an attempted robbery in Brooklyn.

Last month, a fight over cold french fries led to the shooting of a McDonald’s worker in the Bedford-Stuyvesant neighborhood of Brooklyn.

The horrific scenes come despite NYC Mayor Eric Adam’s vow to crackdown on crime in the city, which is up nearly 40 percent from last year.