A BLM Activist Walks Into a Bar and Murders Three People 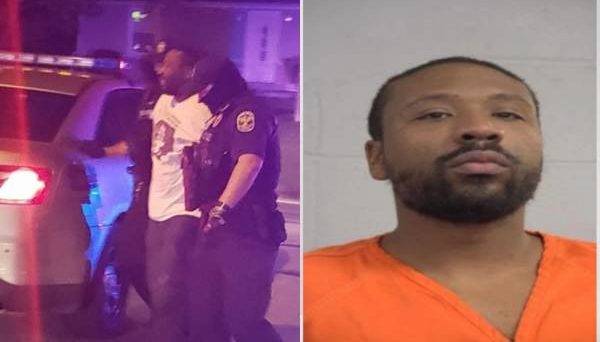 (Gateway Pundit) A black male walked into a Louisville bar owned by a retired police officer and shot three random people at point blank range on Friday night — while wearing a Justice for Breonna Taylor shirt.

The suspect was smiling from ear to ear as he was arrested for the shooting at Bungalow Joe’s Bar and Grill.

Michael E. Rhynes Jr., 33, was arrested just after midnight Saturday after police found him crawling in brush near the restaurant, according to a report from WDRB.

The shooter was wearing a “Justice for Breonna Taylor” t-shirt.

Naturally, the national media has completely ignored this story — which certainly would not have been the case if a mass shooter had been wearing a “Trump” shirt.

Taylor became a Black Lives Matter martyr after being killed by Louisville Police during a “‘knock and announce” drug raid, during which her boyfriend shot at police.

Two of the victims were white and one was black.

Toreon Jermaine Hudson, 26, and William Scott Smallwood, 48, were pronounced dead at the scene, while Steven Matthew Head, 24, died from his injuries at University Hospital.

One of the victims was the fiancé of the bar manager and all three of the men worked together.

A joint GoFundMe for the victims families has raised over $20,000.