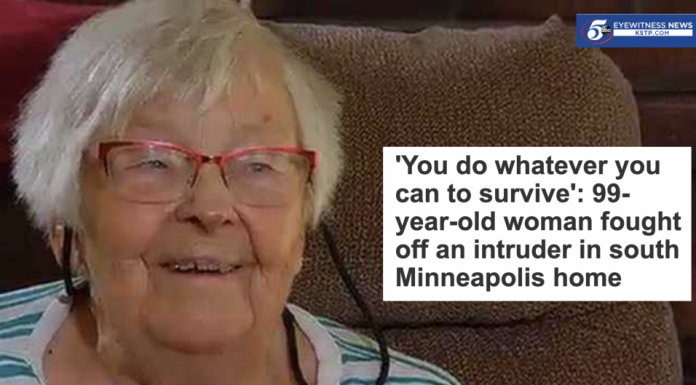 ‘You do whatever you can to survive’

(KTSP CBS 5) A 99-year-old woman fought off an intruder at her home in South Minneapolis.

Minneapolis Police Department confirmed to 5 EYEWITNESS NEWS they are searching for a suspect in this violent break-in.

“You do whatever you can to survive,” said Evelyn Johnson, the victim in this case.

Johnson said a man snuck into her home through a back window around 10 a.m. on Monday and then attacked her, covering her head with a blanket.

“I think he was surprised,” Johnson recalled. “He thought he was just going to cover my mouth and smother me, but that didn’t happen. I fought him. We wrestled for quite a while, according to all my bruises.”

Johnson said the suspect ultimately shoved her into the bathroom and shut the door, making off with about $40 and an iPad…

Minneapolis Police Department is warning about an increase in crime, downtown and in South Minneapolis.

They said officers have responded to 100 robberies and 20 carjackings in the 3rd precinct in July alone, with most of the crimes happening north of 42nd Street East.

Police said thieves are stealing cell phones, purses and vehicles. They said some of the victims have been maced, dragged, assaulted and threatened with guns.

According to MPD crime statistics, there have been 909 robberies in Minneapolis this year, a 37% increase from last year.

“The 3rd precinct is my home and what’s going on is kind of a shame,” Barbara Johnson said. “The fact that we’ve been violated here is really a sad reflection of what’s going on.”

Evelyn’s hearing aid was crushed in the scuffle with the intruder, which will likely cost her thousands of dollars.